You won’t find the village where Marlia* lives on Google Maps. It is upriver, way upriver, from the nearest city, the city with the clinic and the doctors from another country that are keeping Marlia alive. 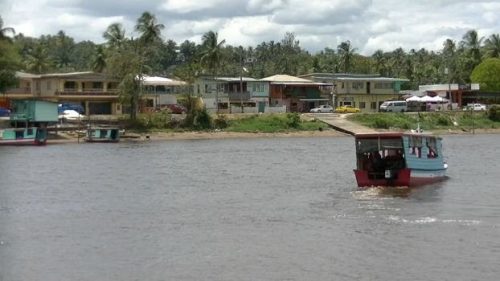 Marlia has end-stage renal disease (kidney failure). She needs to receive dialysis to stay alive. So, three times a week the married mother of two walks out of her small home at six in the morning. She walks through her small village on the Demerara River in Guyana’s jungle and enters a small boat to take her downriver to the industrial town of Linden.
There she boards a bus, which takes her to a stop where she disembarks and climbs aboard another bus, which takes her to the city of Georgetown, the capital city, where she disembarks and walks to the Doobay Renal Centre. Travel time: four and a half hours.

At the Doobay Medical Centre, Marlia receives dialysis, the artificial process that eliminates waste and unwanted water from her blood. Then she walks to the bus terminal, climbs aboard her bus, and makes the return trip home. She gets to her house after dark, just in time to tuck her small kids into bed. She repeats this trip three times a week. Because without her dialysis treatments, she would be dead within days.
St. Joseph’s Healthcare Hamilton, through the International Outreach Program and the Division of Nephrology, is involved in the initiative at the Doobay Renal Centre to provide hemodialysis to all Guyanese who have end-stage renal disease, regardless of their ability to pay 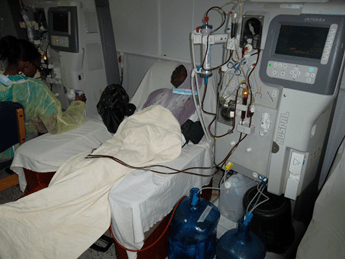 “In a country where the average person earns only US $3,200 a year, the cost of dialysis treatments is beyond the patient’s ability to pay so renal failure is essentially a death sentence for more than 95% of patients,” says Dr. Alistair Ingram, Chief of Medicine and Nephrologist, St. Joseph’s Healthcare Hamilton. “Dr. Budhendra Doobay, a retired vascular surgeon known to many in Hamilton, became aware of this and decided he would open a hemodialysis unit in his ancestral family home in Guyana. He approached the Division of Nephrology and McMaster University for help.” 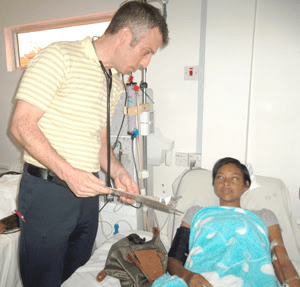 There are now 90 patients dialyzing at the Doobay Renal Centre, with one of five nephrologists (kidney doctors) from St. Joseph’s Healthcare Hamilton visiting at the Division’s expense every two months. Most patients pay nothing, and almost none pay the full cost (about US$40 per treatment). The nephrologists aim to see every patient who is receiving dialysis. A successful dialysis program requires careful monitoring by a physician. Funding comes from caring Guyanese in Guyana and members of the Guyanese community in the Greater Toronto Area. The Division of Nephrology has also provided some funding, and, in conjunction with the International Outreach Program, provides training in Hamilton for Guyanese nationals registered in the University of Guyana Internal Medicine Program.

“This effort is only sustainable if we can build in-country capacity. It is our hope that, if we train enough Internal Medicine trainees from Guyana, that some will choose nephrology as a career, and will practice it in Guyana,” says Dr. Ingram.

To protect her privacy and to maintain patient confidentiality, we have called this mother “Marlia,” a popular name in Guyana.

« An interview with Dr. Youlanda Hendricks from Guyana
All Posts
Donations of PPE sent to Uganda »